What Is Causing Your Foundation Problems, Shifting, and Foundation Cracks To Appear? 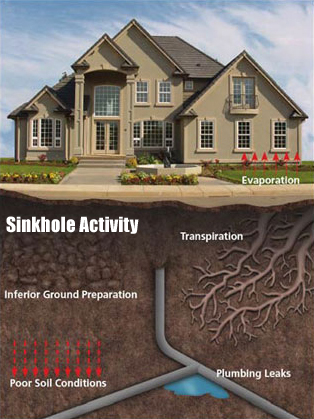 Why Are Cracks Appearing Everywhere?

Weak soil conditions, drainage problems, improper pre-construction site preparation and soil stabilization where needed, inferior materials used by “short cut” foundation contractors, lack of specialized foundation knowledge on the part of a typical general contractor… these and more can result in a shifting foundation and the tell-tale cracks throughout your home, even in the absence of “sinkhole activity.”

“We found a crack on our foundation…related to sinkhole activity… We did extensive research on companies (state wide) who had a proven track record of success and satisfied customers. We found Foundation Services offered all the qualifications to fix the extensive problems that were required for a house of our size (6,000 square feet).”

What Are Some Common Causes of Foundation Failure?

Not enough moisture in the soil can cause foundation cracks. When moisture is drawn from the soil and it becomes desiccated, as in extended periods of drought and other hot and dry conditions, the soil shrinks. This moisture imbalance can cause soils to pull away from the foundation, foundation walls to shift outward and footings to settle. Settlement then causes cracks in concrete and drywall throughout the structure.

Plants and tree roots around or under structures can dehydrate the soil. This will cause soil shrinkage and foundation settlement.

Poor soils, decomposition of organic material, the breakdown of debris and environmental impacts on loose soils may cause expansion and/or contraction of the soil with resulting foundation failure.

The frequent practice of “cut and fill” involves removal of the soil from part of the lot then stacking it in another. The soil should have proper soil stabilization before construction starts, but it most cases that is not done. The improperly compacted soil beneath the foundation may cause unexpected movement.

Many general contractors are not foundation experts. Either to shave costs or due to lack of knowledge, they may use insufficient steel in the concrete. That lack of foundation strength could contribute to future foundation movement.

Since water is used to mix concrete, the concrete expands when wet and then contracts when it dries. The actual drying process for a specific concrete pour is affected by such factors as the type of aggregate and mix of concrete, weather and humidity, among others. Also, if the concrete foundation is poured in batches hardening at different times, the foundation is no longer monolithic, and a cold joint forms. Water then can seep through the joint and cause cracking.

Leaky plumbing results in moisture build-up that is often a major contributor to foundation problems.

Improper grading, bad gutters, higher neighboring elevations, super storms and other problems can cause excessive moisture build-up near your foundation, resulting in soil saturation problems. This could erode or consolidate the soils underneath your home, and cause shrinking and swelling of the soils, especially in clay soils. Many foundations are not built to withstand that extra pressure as the soils around the base of your foundation expand, forcing walls inward.

The resulting shifts or settlement of your structure will damage your foundation. As footings that support your structure then “settle” into the saturated soils, that causes walls to crack. If you have a basement, the excessive pressure exerted against from moisture-laden, expanded soil can then force your walls inward, first showing up as diagonal cracks coming off corners. Your warning signs of these soil saturation related problems will be such things as visible cracks in concrete, gaps in moldings and door, sticking windows and more.

Click here to learn more about an underground drainage system that might solve your drainage problem by carrying the excess water away from your foundation and into a permeable area.

Are You Experiencing Any Of These Foundation Problems?

The most trusted name in foundation repair
in Central Florida for over 20 years!

“I am very pleased with the outcome of the project… I believe that Mr. Stephenson and his crews should serve as models to other companies wishing to achieve outstanding customer relations.”